Praise for Twice Told Over:

"For its eye of the all-seeing crocodile half in dark waters and half in the prey-light of death and hunger, for its electric rush of love, its gambles with destiny, for its deep knowledge of borderlessness, the slippage of love and dissolution into something like Mystery makes this collection a rare magic. And perhaps, because of its woman eye, illusory skin, bleached colors and its various upside-down taboos where words and love-deeds are “hechas para atrás / pushed aside,” I commend this book. It is a surreal mathematics, a travelogue to ancestors, a gypsy’s deck of last-breath, plotting flowers ditching toward the sun. A tour de force, magnificent, lovely, sculpted, drenched with Borges, Sexton, Najarro. A radically new Latina verse."
Juan Felipe Herrera
Poet Laureate of the United States


"Between Nicaragua and the United States lives the Country of Spirit. This is where poet Adela Najarro breathes a world fresh and merciful with words that spring from the heart of our troubled lands, our families and our desire to love. I applaud her vital, luminescent and transcendent understanding that Mystery can be shared and understood, poem by poem. Embrace her work, for it is our future." 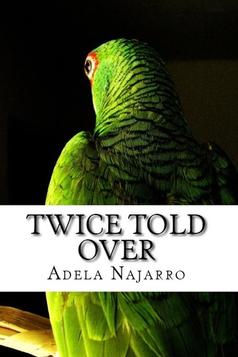 and history. We brought with us red and blue macaws, panthers,
and crocodiles. Tooling up and down
Dolores Street hills, my Papi rode

a bicycle delivering Lela's nacatamales. Back and forth
from a clock tower at the end of Market Street,
a renovated 1919 streetcar,

of the Italian glitz, nor fathom the deep blue of the Mediterranean
while sipping an ice cold Coca-Cola, but there is a warm blanket
on a wooden bench and a leather

a Direct TV satellite dish. Gabby walks to school, Pokémon
cards in his pocket. Sanchez Street. I work
in the kitchen with my Lela. Mariposa Avenue,

Valencia Street, Camino Real, are added to masa. Homemade
tortillas puff into sweetness. I'm not
one third Irish, one half German

and two parts English with a little Cherokee thrown in,
but last night I couldn't translate the word “hinge”
on every door that opens and closes

to clouds beyond four walls. An old lady, perhaps Cambodian,
Vietnamese, Korean, something of her own,
hurries off the 31 Stockton while

my Tía Teresa double parks in front of the mercados on 24th Street
para los quesos y los chiles in the backroom. One
whiff and the world is not so small.

Because Somebody Loved Them

When I wake to snoring in my ear,
dew is sticking to the inside of the tent
and sliding down onto my sleeping bag.
Last night we turned off the main highway
onto a road used to truck out
wheat and sunflowers
and pulled up a gravel driveway
past a wrought iron fence. In California

there is no space for cemeteries
between corn and soybeans, only parks
with marble angels and fountains.
Once, when my grandmother went to visit
her mother, a little lady from Nicaragua
who smoked a pipe and wore plastic shoes,
she left behind the scrap of paper
on which she had scribbled the plot number.
Mi abuelita couldn't find the plaque
marking her mother's ashes
and she was lost along
cement pathways, the fine green lawn.

This week we drove through North Dakota
where the grain and fields
fold into cemeteries. Tombstones
behind fences, in yards,
next to farmhouses, off two-lane highways
in the middle of nowhere. We had seen
boys jumping into a river off the steel gurneys
of a railway overpass and a little girl
lifted onto an ATV by her grandfather. They turned
onto a dirt road, followed by their dog. Bones

are sunken down, there under the ground,
in coats and dresses, still wearing
wedding rings and lace.
We walked and took a picture of pink sky
falling behind steel gray letters.
Someone had loved them

enough to come out here and lower them in
with the other people
from around these parts.